by Patrick A. Gaughan, Ph.D.

Statement of the Problem: In recent years many construction worker plaintiffs have filed personal injury lawsuits claiming for economic damages in the form of lost wages and benefits based upon their prior earnings during a time when the industry was booming. However, for workers with legitimate injuries, their true losses may be a fraction of what they may be representing them to be due to the collapse of this industry.

The U.S. Labor Market is in Turmoil

The U.S. labor market has stagnated with unemployment rates being troublingly high (i.e. July – Sept it was 9.1%). The average number of weeks workers are unemployed has risen from 16.9 in January 2006 to 40.5 in September 2011. However, even more telling is the underemployment rate, which includes not just the unemployed but also those who are working part-time but who want full-time employment as well as those who want a job but who have given up. As of September 2011 this rate was 16.3%!

The Construction Labor Market is in Far Worse Condition

Examples of Construction Job Types That Have Been Lost: Carpenters, Electricians and Laborers

Over the period 2006 – 2010 an incredible 365,580 carpenters have lost their jobs. Over the same time period 238,830 laborers and 102,610 electricians joined the ranks of the unemployed!  The downturn has devastated both the skilled and less skilled construction workers.  Ironically, the possession of unique skills that were once in great demand has not prevented workers, such as carpenters, from joining the long term unemployed. 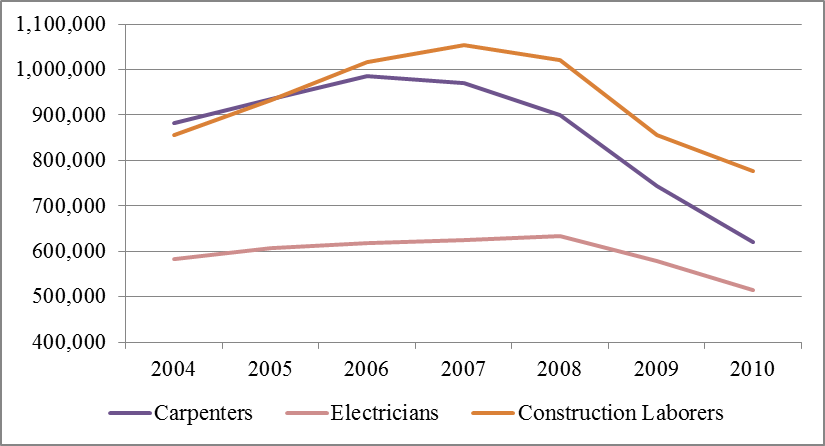 Plight of the Immigrant and illegal Alien Construction Workers

While the ranks of construction workers who are U.S. citizens have been decimated, the position of the immigrants and illegal alien construction workers is far worse. Many such foreign workers moved to the U.S. when the economy was strong.  Many of these workers do not speak much English and have little education. When the economy is overheating they have a chance to get a job.  However, when the U.S. economy fell into the Great Recession, these workers were among some of the first to be laid off. Many such former workers have returned to their home countries. Indeed, some of these home countries, such as Brazil, are actually showing strong economic growth.

Workers who have filed personal injury lawsuits may claim they have lost earnings and benefits similar to what they earned when the economy was booming. They may put forward projections using as a base the earnings levels from periods such as 2006 and 2007. Given the nature of the post-recession construction industry labor market, such claims may greatly exaggerate their true losses. In fact, many of these workers would not even have a job this industry today. Therefore, projections based upon the joint assumption of permanent U.S. residency and historical earnings levels may be highly speculative.

This white paper summarizes a few of the conclusions of the study conducted by Economatrix Research Associates, Inc. – The Dramatic Decline in the Construction Industry: Ramifications for Defendants in Personal Injury Litigation.