Why Do We Keep Asking Greenspan What He Thinks We Should Do About the Economy?

The continual attempts of former Fed Chairman Alan Greenspan to be a public advisor on the economy to all who care to listen is surprising in light of his horrendous track record. For example, just last week he told us in no uncertain terms that we need to let the Bush tax cuts expire. However, what is even more surprising is how receptive the media is in seeking him out and getting his opinion on the state of the economy and what should be done about it. If there is anyone who has demonstrated through his actions that he lacks a good understanding of how monetary and fiscal policy should be conducted it is Alan Greenspan.

Many of us have short memories but have we really forgotten that Greenspan was chair of the Fed from 1987 – 2006 which included the second half of the 1990s when his low interest rate policy helped fuel the internet stock market bubble? Have we forgotten that he also engineered the low interest rate policy that brought the federal funds rate down to 1% providing the fuel for another bubble – this one in real estate? Have we also forgotten that his incredibly narrow view of financial regulation caused him to take a hands off and do not regulate at all approach to banks and the whole mortgage lending industry in general?

While in office one skill that Greenspan was a master of was his convoluted “Greenspan Speak” where he continually spoke in such obtuse and vague terms that one had to struggle to discern what was his and the Fed’s true position on the economy. All of a sudden he seems to be able to speak more clearly – even if his recommendation, to raise taxes in an incredibly weak economy, is highly questionable.

We now know that while at the Fed his view was keep to interest rates as low as possible and leave financial institutions alone and they will carry us all to the Promised Land. He gladly accepted accolades – especially from those who filled their pockets with the short term wealth his policies helped create. Courted by politicians he gratefully accepted all the praise bestowed upon him – especially by the recipients of the “Greenspan Put” – an option which has long expired. In February 1999 he even made the cover of Time magazine as head of the “Committee to Save the World”.

Looking back now we can better appreciate the magnitude of his errors and the true fallout from his totally negligent approach to financial regulation – which effectively was no meaningful regulation at all. Looking back on his career, and the pain his failings has caused, it is best summed up by his smiling acceptance of the “Enron Award for Distinguished Public Service” which he received from the late Ken Lay – just two weeks prior to the Enron’s bankruptcy filing.

Is it possible for the media to stop asking Greenspan what he thinks we should do about our sick economy? He was the lead doctor who applied the damaging treatment that has made the patient, the economy in this case, so seriously and chronically ill.  There are thousands of economists in the United States, and there is not one I would want to hear from less than Mr. Greenspan. Can the 84 year old former Fed chairman please go away as he has done enough harm?

Dr. Patrick A. Gaughan is president of Economatrix Research Associates, Inc.  and is also a full professor of economics and finance at the College of Business at Fairleigh Dickinson University. He is the author of many books and articles on economics and finance including the award winning graduate textbook Mergers Acquisitions and Corporate Restructurings, which will see its fifth edition be released by John Wiley and Sons later this year. 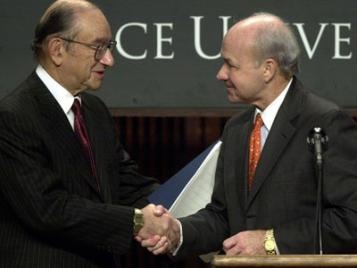